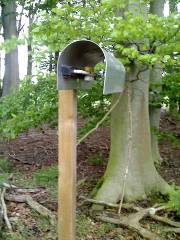 Critical loads maps indicate that the majority of broadleaf woodland and also conifer woodland (>90%) in the UK currently exceeds the critical load for nutrient nitrogen (Hall et al., 2004), although widespread effects of excess nitrogen deposition are not evident outside woodland edges (Moffat, 2002). Edge effects are very important for small plantations.

Another area of uncertainty is that where much of the N loading is derived from ammonium deposition, this nitrogen load is likely to be smaller to the ground flora as a result of uptake by the overstorey. Thus, nitrogen critical loads exceedances needs to be interpreted with caution.

The 5 km-resolution maps show the distribution of ammonia concentrations and deposition in the UK. However, to assess the effects on the environment, even a resolution of 5 km is limited – given the local variability in reduced N deposition.

While the national maps show the average deposition to different land types in each grid-square, there is a huge range within each square. So, while the centre of a large nature reserve may be less at risk than the overall national assessment suggests, smaller reserves and the edges of large reserves are much more at risk. The greater risk near emission sources is of particular concern because the amount of deposition increases substantially the closer you get to the source.

Experiments at Thetford and Alice Holt

Thetford Forest, East Anglia is associated with extremely high and variable N loading predominantly due to high NH3 emissions and also high N-deposition that relate to the agricultural and farming activities occurring in this area (Sutton et al., 2001).

An intensive experiment was set-up at Thetford in two plots selected under Corsican Pine (30 years old) and Beech (70 years old) next to a point source of organic N-pollution. The experiment was established in 2005, and intensive monitoring is taking place in 2005-6 and 2006-7 and 2007-2008.

The investigation takes place on transects from south west to north east (the same as the wind direction), established from the woodland edge towards the woodland centre with a number of transect positions in a Corsican pine and Beech stands. 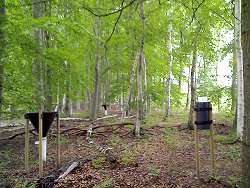 In order to build a broader picture of how N and the forms of nitrogen affect the amount and quality of litterfall and thus the nutrient input to soils, the overall averaged amount and form of nitrogen from deposition and litterfall at conifer and broad-leaved forests at Thetford (an area associated with very high N deposition) will be compared with the same at conifer and broad-leaved stands at Alice Holt (an area associated with much lower N deposition).

The preliminary results suggest that in the Corsican pine there is a distinct gradient of soil NH4 and NO3 with a distance from the woodland edge due to a strong gradient in N deposition (Figure 1 below).

There are similar gradients in both N forms under the Beech stands (Figure 2 below).

Soil pH also shows a gradient with distance from the woodland edge with approximately half of a unit difference (Figure 3 below).

Intensive monitoring of nitrogen emission, rainfall, throughfall and soil solution chemistry, litter biomass and chemistry in addition to below ground and above ground tree nutrient uptake at Thetford and Alice Holt is ongoing.

Figure 1.
Average soil NH4-N (a) and NO3-N concentrations (b) along a 200 m transect from a Corsican pine woodland edge near a pollution source. Values are averages of every 20 m data (n = 4).

Figure 2
Soil NH4-N (a) and NO3-N concentrations (b) under Beech forest based on ten samples taken every ten metres in a 200 m transect away from a pollution source.

Figure 3.
Average soil pH under (a) Corsican pine and (b) Beech stands along a 200 m transect away from a pollution source. Values are averages of every 20 m data (n = 4).

Kennedy F. (2003). How extensive are the impacts of nitrogen pollution in Great Britain’s forests? In: Forest Research annual report and accounts 2001 to 2002. The Stationery Office, Edinburgh.