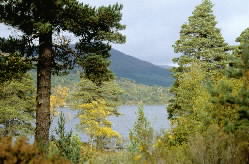 This programme covers the upland native oakwoods, pinewoods, birchwoods and mixed ashwoods as described in the respective Forestry Practice Guides.

Over 85% of the native woodland area (not including planted woodlands of native species) in Scotland is found in the Highland Region. Of the total of just under 105 000 ha:

In addition, there are over 45,000 ha of native oakwoods in northern England and Wales.

As a consequence of the increased priority given to native woodlands, the area is being expanded through new planting and the extension of existing woods by natural regeneration. In 1995/96 grant aid under the Woodland Grant Scheme was approved for 8 400 ha of broadleaved planting (nearly all native spp.), and 2 700 ha of native Scots pine. In addition, approval was granted for operations to secure natural regeneration on a further 4 100 ha (mainly native pine).

Upland oakwoods have declined by 7% since the 1930’s with a further 38% replanted with non-native species (Biodiversity Action Plan, 1995). Many of our current upland oakwoods are degraded remnants that are a consequence of the decline in management of coppice woods. Individual woods are typically overgrazed and invaded by Rhododendron ponticum.

The area under birch has also been substantially reduced compared with previous distribution of native woodland. Many existing birchwoods are typically unmanaged and in poor condition, with overgrazing from deer and sheep and a lack of natural regeneration.

The native pinewoods which once covered approximately 1.5 million ha of Highland Scotland, are now reduced by only 16 046 ha represented by 77 individually recognised pinewoods (FC Caledonian Pinewood Inventory, 1994). More than 9,000 ha are contained in only seven major woodlands:

Of the remaining 70 woods, 33% are degraded remnants of 20 ha or less, and many consist only of scattered individual trees.