Rhododendron ponticum (L.) is a non-indigenous evergreen shrub belonging to the Ericaceae family. It was originally introduced by Conrad Loddiges as seed in 1763 to be used as a cultivated flowering plant in gardens, parks, and estates as a horticultural exhibit, but was also extensively planted in western Victorian hunting Estates under woodland canopies and on heathland areas to provide shelter for game species. They also used Rhododendron ponticum as a rootstock for grafting scions from less hardy but more colourful stock from places such as China and the Himalayas.

R. ponticum grows particularly well in the climate and soils of the British Isles, showing a preference for acidic soils in areas of high humidity, a combination found predominantly on the west of Britain and Ireland. An association with a mycorhizal fungus enables it to assimilate nutrients more effectively than associated species.

Although it possesses attractive flowers R. ponticum has few attributes that offset the negative impact it can have on an invaded site. It has been shown to reduce the numbers of earthworms, birds and plants and regenerative capacity of a site, leading to a reduction in the biodiversity of the area. Physical access to a site can be reduced by the density and size of mature bushes, and management costs then rise as the bushes need to be treated prior to other activities being carried out. Established bushes then act as a seed source for further invasions in adjacent areas, eradicating ground cover plants and interfering with the process of natural regeneration of trees.

Control of R. ponticum invasion in woodland is often the first operation in the restoration of native habitats. The choice of control/eradication method can influence the recovery of the site, and this should be considered when planning any operations. Control options that include the complete or partial removal of R. ponticum shoots before herbicide control will allow faster re-invasion of plants, especially if coupled with ground disturbance. The speed of recovery is also dependent on a local source of viable propagules. 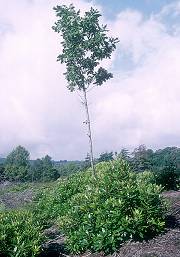 A stem injection control method has been successfully trialled in Western Scotland and Wales.

The removal of the largest plants has until now posed the greatest challenge and expense to managers, their continued presence in the environment the greatest threat to the species’ long-term eradication, as mature bushes can produce up to a million seeds a season, continually re-invading surrounding habitats.

Injecting herbicide directly into the stems of large rhododendron results in their death within six months. Not only is the dead material then easier to remove, but the application of the herbicide is more precise than in traditional methods, uses less product producing overall cost savings.

At Inverewe gardens, the National Trust for Scotland, famous for their extensive Rhododendron collection, has recently been using the stem injection method to control seedlings from their hybrid Rhododendron ponticum windbreaks invading surrounding woodlands.

Land owners and managers across the west of Scotland are invited to join a pro-active effort to tackle rhododendron ponticum to benefit business, communities and biodiversity.