No seed zone effects on the survival, growth, and stem form of Pacific silver fir in Britain

Home publication No seed zone effects on the survival, growth, and stem form of Pacific silver fir in Britain 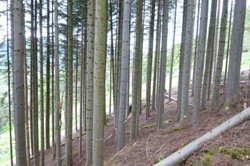 With our climate changing and an increasing range of pests and diseases affecting trees in Britain, it is important forest managers diversify the tree species they plant and use a wider range of forest management systems (e.g. continuous cover forestry).

Pacific silver fir (Abies amabilis) is a tree native to Pacific north-west America. It was first introduced to Britain in 1830, however many of the early introductions where not successful and so it was not widely planted as a timber tree species. In recent years there has been an increasing interest in its potential as an ‘alternative’ forestry species in Britain.

In this paper, the results of six experiments established in the uplands of Britain examining Pacific silver fir, clearly show that the species has the potential to be as productive as other common tree species used for timber in Britain, and that could be used more widely to diversify forests as a plantation species and in continuous cover forestry. Generally the species was very productive, and on four of the six sites, the minimum was General Yield Class 20.

The analysis was based on trials established in 1985 at sites across England, Scotland and Wales, using material from 14 seed zones in the Pacific north-west of America. It showed there was little variation in performance of trees planted using material derived from the 14 seed zones, and that future seed collections could be carried out within a wide geographical range, including mainland British Columbia and Vancouver Island and the Olympic Mountains and western Cascades of Washington.

The trials used in the work were established by Forest Research in 1985. They have been preserved by the Long-term Experiments project which aims to conserve the best silvicultural and genetics field experiments as a strategic resource to future research and to inform forest policy and practice.

Read No seed zone effects on the survival, growth, and stem form of Pacific silver fir in Britain