On 31st January 1953 a major storm caused wide-spread damage and loss of life across northern Europe.  Sometimes forgotten in the wake of this disaster was that when the storm tracked across north Scotland, wind speeds had reached over a hundred and ten miles an hour, destroying approximately 1.8 million m3 of woodland.

The unprecedented scale of the damage revealed that wind was a much bigger limitation to plantation forestry than had previously been realised.  However, the relatively young forest industry had little experience of how to manage wind risk. 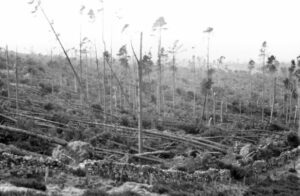 Large scale windthrow to a pine plantation in Aberdeenshire, 1953.

In response, an ambitious research project was launched by the Forestry Commission, aimed at developing understanding of the processes that are responsible for forest wind damage.

The early research started by mapping the wind climate across the UK.  A network of “tatter-flags” was set up. Data from thousands of flags were analysed to produce the first wind climate map for the UK. This was later used as the basis for the “DAMS” (Detailed Aspect Method Scoring) windiness scores.  Today these are still used in forest management. 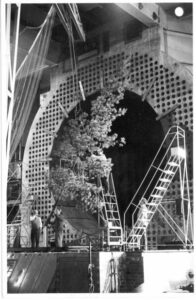 By the early 1970s research was also exploring the way that wind interacts with the crowns of trees.  Whole trees were placed in a large-scale wind tunnel that was borrowed from the Royal Aircraft Establishment at Farnborough.  Over the decades this research has evolved to make use of advanced computer simulations to look at the structure of wind gusts and eddies over forest canopies.  The figure to the left shows a pine tree being positioned in the Royal Aircraft Establishment wind tunnel in Farnborough.

There was also a need to understand how the roots and stems of trees resisted wind loading to keep trees standing. Root anchorage experiments were carried out on more than 2000 trees over several decades to provide an understanding of the stability of a range of tree species.

In the 1970s and 80s information and understanding of the wind climate and tree stability was used to develop a “Windthrow Hazard Classification” to help foresters harvest trees before they reached a height where they would be particularly vulnerable to windthrow.  This had limitations so, when computer modelling capability became better developed in the 1990s, the accumulated data from wind tunnel studies, root anchorage experiments, studies of wood properties, and wind climate data, was reanalysed and linked in a new way to build the ForestGALES wind risk tool.

The tool has been upgraded over the last 20 years to improve its accuracy. It is now widely used in the forest industry across the UK and has been adapted for use around the world.

Forest Research is working with the European Forest Institute to integrate ForestGALES with advanced airflow models and tree growth models and to incorporate remote sensing and GIS data.

Forest Research has also recently developed ForestGALES to calculate risk to individual trees within mixed species and mixed-aged stands. Together, these developments will enable more detailed information and advice to be provided on wind risk for a wider range of species and silvicultural systems, including continuous cover forestry, in our changing climate.

More information about research on tree stability and wind risk is available on the Forest Research website. 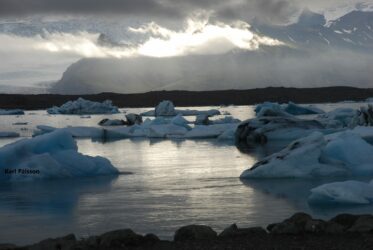