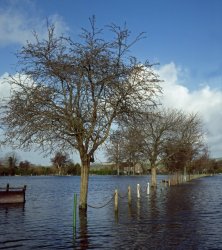 Most of the effort directed at climate change in the UK has concentrated on mitigation: minimising change by reducing greenhouse gas emissions. Planning for and adapting to climate change has increased in importance as it has become more widely accepted that certain changes are likely to happen in the next 30 to 40 years. Climate amelioration in urban areas is essential, as climate change is likely to enhance harmful effects already caused by urbanisation, including flooding in winter and urban heat islands in summer.

For example, urban flooding is currently estimated to cost £270 million a year in England and Wales, with 80,000 homes at risk. With climate models predicting a 20 to 30% increase in winter rainfall by the 2080s, such an increase could lead to a much larger increase in flood risk (up to 200%). Similarly, the urban air temperature is gradually rising in all cities in the world. This is due to several factors:

Vegetation has the potential to ameliorate the effects of climate change in our UK cities. When talking about vegetation at the scale of a catchment, a city or an agglomeration, we usually refer to green infrastructure or green networks. As we are already experiencing the effects of climate change, it is becoming urgent to plan and design new landscapes containing integrated green infrastructure.

Urban greenspace provides areas within the built environment where processes such as shading, evaporative cooling, rainwater interception, storage and infiltration can take place. Green spaces in urban areas have the potential to mitigate the urban heat island effect during hot summer days by reducing the air temperature in cities, whilst also improving public health and well-being and the quality of urban conditions.

Several studies have reported promising potential for greenspaces to ameliorate climate conditions locally. In Japan, comparison of current temperatures in city parks and surrounding urban areas has demonstrated differences of 2.5 to 4°C. According to other studies, large numbers of trees and urban parks could reduce local air temperature by 0.5 to 5°C. Simulation studies on Greater Manchester report that 10% increase in urban green cover in high-density residential areas (green roofs) would decrease expected maximum surface temperature in the 2080s by around 2.5°C.

Similarly, green infrastructure with sustainable drainage potential can mitigate risks associated with flooding. In this context, benefits include:

For potentially contaminated brownfield land, greenspace establishment is also a sustainable solution to mitigate or break pollutant linkages during future rainfall and flooding events, for example as a result of soil erosion.

It is acknowledged that an increase in greenspace cover has the potential to ameliorate climate and the effects of urbanisation.

Urban greenspace can be increased in many ways: from traditional solutions such as grasslands, amenity trees or community woodlands, to more innovative types of greenspace such as vegetated walls and green roofs. These solutions are already available, and often just require integration into existing planning. However, strategies in terms of percentage of green cover, location and design of green infrastructure have yet to be developed. To be fully effective, climate-conscious planning needs to be undertaken at various scales; neighbourhood; whole-city; conurbation or catchment.

Research is being carried out on strategic planning and urban design solutions to prepare for climate change in UK cities. One example is the UK project Adaptation Strategies for Climate Change in the Urban Environment (ASCCUE). This is one project within the Building Knowledge for Climate Change research programme. The use of GIS tools and models can help to quantify future developments. The case study below shows an example of such an application.

Planning both the location and design of new developments is central to the management of future flooding. In December 2006, the Department for Communities and Local Government published Planning Policy Statement 25: Development and Flood Risk, which requires that all new developments are assessed for flood risk, and makes the Environment Agency a statutory consultee for development in areas at risk. The Environment Agency promotes sustainable urban drainage as the default option for urban drainage and flood alleviation schemes. The sustainable drainage elements that the Environment Agency recommends include: green roofs, ponds, wetlands and grassed swales. A grassed swale is a graded and engineered landscape feature appearing as a linear, shallow, open channel in which flood-tolerant, erosion-resistant plants grow. The design of grassed swales promotes the conveyance of storm water at a slower, controlled rate and acts as a filter medium, removing pollutants and allowing storm water infiltration. When properly designed to accommodate a predetermined storm event volume, a grassed swale results in a significant improvement over traditional drainage ditches in both slowing and cleaning water.

In this context, developments are designed to direct the flow on the surface. When there is heavy rainfall, greenspaces and roads could provide temporary storage of the floodwater. Drainage systems may, on some occasions such as during very heavy rainfall, not be able to cope with the excess run-off. Excess run-off can be directed towards greenspaces, and roads are therefore potentially good candidates for transport of the floodwater, providing that their design is adapted (POST, 2007 (PDF-116K)).

There are also opportunities for reducing run-off upstream of cities. This can be done at the periphery of cities by extending or creating peri-urban woodlands that would reduce the amount of run-off upstream.

A study was undertaken in Great Manchester as part of the ASCCUE project. It illustrates that increasing the current area of green infrastructure in Greater Manchester by 10% (in areas with little or no green cover) could result in a cooling of up to 2.5 °C under the high emissions scenarios based on the UK Climate Impacts Programme (UKCIP02) predictions.

Forest Research has experience in planning for climate amelioration in the urban environment. Research has informed guidance on the best locations and designs for green infrastructure, and consultancy and research services are provided to the Forestry Commission and external clients.

Dimoudi, A. and Nikolopoulou, M. (2003). Vegetation in the urban environment: microclimatic analysis and benefits. Energy and Buildings 35: 69-76.

POST (2006). Adapting to Climate Change in the UK (PDF-124K). Postnote No. 267. Parliamentary Office of Science and Technology, London.