Robert leads the Forest Mensuration, Modelling and Forecasting Science Group at Forest Research. He manages a team of around 10 staff and oversees the delivery of a large and diverse portfolio of research projects. Robert secures, manages and delivers a range of externally-funded projects which vary in size, complexity and duration. A common theme in all work undertaken within the programme involves the development and application of methodologies and models that can be used to quantify and improve the economic and environmental performance of forestry systems.

Robert frequently serves as a representative of the Forestry Commission or UK Government expert, or as an independent scientific advisor, on external and international committees and working groups. He regularly makes presentations at regional, national and international meetings and conferences.

Robert has worked at Forest Research for over 30 years and is an authority on forest mensuration, growth and yield. He is also an internationally recognised expert on forest carbon dynamics, with particular interest on the greenhouse gas impacts of forest management and wood utilisation options. He co-authored one of the first research publications on this subject in 1989. He holds an honours degree in biophysics from the University of East Anglia and a research MSc in bioengineering from the University of Birmingham. 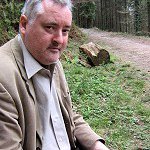 The findings of this project are being made available in the form of a Summary Report, published on 27th July 2022, and a Full Assessment Report, which will be published later this year.

Robert is responsible for delivering the research outputs of the Science Group under this programme, which include:

Realising the vision of the new Modelling Strategy

A new growth model for representing the development and management of mixed-age, mixed-species forest stands

Maintenance and further development of the Forestry Commission Forecast System

Systematic technical evaluation and documentation of a number of high-impact models owned by the Forestry Commission, for the purposes of Quality Assurance.

Bioenergy Life Cycle Assessment (funded by the Energy Technologies Institute and coordinated by North Energy Associates):
Robert leads contributions on the modelling of forest management and wood utilisation scenarios for bioenergy production from the UK, Fennoscandia, Baltic States, Canada and the USA.

Measurement and Analysis of bioenergy greenhouse gases: Integrating GHGs into LCAs and the UK Biomass Value Chain Modelling Environment – MAGLUE (funded by EPSRC through the SUPERGEN Bioenergy Hub):
Robert leads contributions on the modelling of forest management and wood utilisation scenarios for bioenergy production from the UK, Fennoscandia, Baltic States, Canada and the USA. He is also extending the work to full LCA of forest bioenergy chains.

Participated on behalf of BEIS in fact-finding visit to Southern USA on impacts of wood pellet supply from the US for use as energy in the UK, May 2017, Mississippi and Louisiana.

Participated in internal meeting of AEBIOM (European biomass industries group), including making a presentation on the outcome of the European Commission Project, “Carbon Impacts of Biomass Consumed in the EU”, 31st March 2016, Brussels.

Participated in stakeholder workshop on EC DG ENER “Biosustain” project and (including making presentation on the outcome of the European Commission Project, “Carbon Impacts of Biomass Consumed in the EU”), 7th December 2015 Brussels.

Participated as Expert Panel member in International Stakeholder workshop organised for EC DG ENV project, “Study of the Environmental Implications of the Increased Reliance of the European Union on Biomass for Energy Imported from North America”, 18th September 2015, Brussels.

Participated in “Carbon Summit” with representatives across departments of the Welsh Government, to advise on options for mitigating GHG emissions through forestry measures, and associated accounting systems, 25th June 2015, Cardiff.

Participated in Final Project Meeting (coordinator and lead for contractors’ side), of European Commission Project, “Carbon Impacts of Biomass Consumed in the EU”, 28th April 2015, Brussels.

Presented invited paper at plenary session of International Symposium on Forest and Sustainable Development organised by the University of Brasov, 24th-25th October 2014, Brasov

At the request of FC England, participated as technical expert in a meeting between DECC officials and representatives if UCL, to discuss representation of LULUCF in the UKTM energy sector model, for the development of the UK’s 5th Carbon Budget, August 2014, London.

Presented at and participated in International Expert Meeting on accounting for GHG emissions of forest bioenergy organised by EEA, IEA Bioenergy Task 38 and IINAS, 19th-20th May 2014, Copenhagen, Denmark.

Regular participation with other colleagues from the Science Group at the Royal Welsh Show and the APF show.