Are there links between tree health and ectomycorrhizal fungal communities under changing environmental conditions? 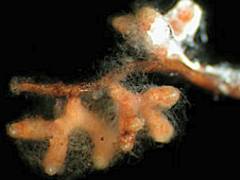 Ectomycorrhizal fungi (shown here growing on a Scots pine root tip) are intimately associated with the roots of most temperate tree species. Hyphae, the thread-like filaments of fungi, wrap around the root tips of the tree and through them water uptake and nutrient exchange take place. The hyphae are also known to provide trees with a degree of resistance from drought and also serve as a protective barrier from diseases.

The fruiting body, or sporocarp, of a fungi. 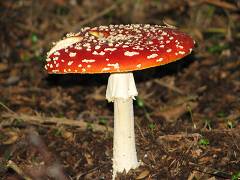 Ectomycorrhizal (ECM) fungi are intimately associated with most temperate tree species and have demonstrated important and rapid shifts in species composition and abundance in response to a range of environmental stresses (e.g. droughts, eutrophication and/or acidification of forest soils).

Monitoring of changes in ECM fungal communities might, as a result, serve as a sensitive early warning indicator of environmental change that has the potential to be disruptive to trees. This might develop where environmental change, such as the eutrophication of forest soils, interferes with the varied functional roles of ECM, including the vital roles of facilitating carbon, nutrient and water uptake in trees.

This project uniquely applies molecular genetic techniques to characterise the ECM communities of fungi found in P. sylvestris Intensive Forest Monitoring plots at a wide geographical scale (UK, Germany), allowing for detailed information about ECM community structure and composition to be linked to the environmental variables measured at each site.

Additionally, the sampling scheme has been designed to allow an assessment of the optimal sampling strategy (intensity and frequency of sampling) required to best capture ECM diversity occurring in P. sylvestris plantations; this will increase the efficacy of future ECM studies being carried out at similar sites.

This study is, furthermore, the first to use P. sylvestris mirosatellite markers to enable us to understand the degree of spread and overlap of P. sylvestris roots in plantations, and to link individual trees to the ECM communities with which they associate. It is expected that ECM fungal species with a clear affinity for high N environments will be identified and specimens isolated and stored for use in subsequent research projects.

The overarching objectives of the research are:

In order to achieve this objective, the specific aims are to: 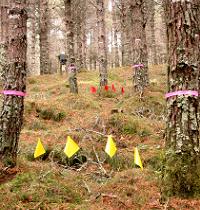 Baseline field survey work of ECM communities was conducted in the autumn of 2006 in the three UK Level II Scots pine plots situated in:

The goal of the baseline survey was to:

Sampling was undertaken along 10 transects running between pairs of trees within each of the three Level II plots. Two soil cores were collected at four equally spaced points along each transect. These two soil cores were 10cm apart from one-another on opposite sides of the transect point. Root tips were washed from the soil and those which were alive and mycorrhizal were separated from those which were dead or non-mycorrhizal. Four randomly selected mycorrhizal root tips were retained for molecular analysis. In total 960 mycorrhizal root-tips were removed for DNA extraction, PCR amplification, and DNA sequencing. The identity of the colonising ECM fungi was then ascertained through BLAST searches of the GenBank database.

This has raised questions as to the possible causes of these differences. Previous work has indicated that nitrogen availability may affect the species composition of ECM fungi, and the three UK Intensive Forest Monitoring plots do substantially differ in N-loading, with Thetford and Sherwood receiving higher inputs than Rannoch. In order to assess this further, several additional sites in Germany have been selected for inclusion in a larger-scale survey of the ECM fungi present in P. sylvestris plots. All of these additional sites are all well-characterised Intensive Forest Monitoring (Level II) plots and differ in the level of N-deposition they receive.

ECM fungal species have been shown to have a patchy distribution, but it is unclear how stable these patches are over time or across seasons. In order to address this, an additional study to look at the stability of ECM fungal distribution across different seasons was carried out at the Thetford and Rannoch Intensive Forest Monitoring plots. Soil cores were collected within 10cm of the original coring position and analysed in the same way as described above. The results of this work indicate that the ECM community within an area is highly stable between years, with the same species frequently being recovered from the same points.

Microsatellite analysis should allow the ECM fungal community to be unambiguously associated with an individual tree, thereby allowing for:

Foliar samples were collected for ‘genetic finger-printing’ of each pair of trees included in the baseline survey (20 trees in total in each Level II plot). Root tip samples from which ECM fungal sequence data were successfully obtained were similarly ‘finger-printed’. This was achieved using the same primers as were selected from the screening procedure for the foliar samples. Chromatograms from root tips and potential host trees will be compared visually to allow accurate allocation of each ECM sample to the correct host tree.

Scots pine seedlings raised in sterile conditions have been planted out in the Thetford and Rannoch Level II plots in order to ‘bait’ local ectomycorrhiza. Fertilisation experiments are underway to determine nutrient related responses of ‘baited’ ectomycorrhizal communities. Cross-transplanting of seedlings between the Rannoch and Thetford Level II plots are also underway to assess ECM community responses to the contrasting nutrient environments at these two sites. 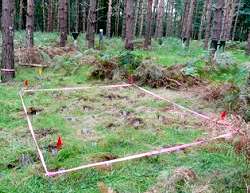 Scots pine seedlings are planted on a grid in seedling beds adjacent to the Thetford and Rannoch Level II plots. Individual seedlings are surrounded by a clear plastic tube to help protect them from herbivory. 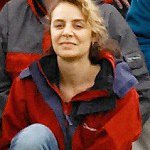