Impact of pests and pathogens under changing management

Home research Impact of pests and pathogens under changing management

This research programme tests the hypothesis that increasing the structural complexity of forest stands will lead to greater biological diversity, and that this greater diversity will lead to fewer pest problems.

Research carried out under the programme will indicate the degree of stand complexity required to realise benefits of higher diversity and reduced pest impact, and whether this will be achieved by the alternative silvicultural systems that are currently being developed.

The programme is another aspect of the work being carried out by Forest Research on Continuous cover silviculture.

Current work within the programme focuses on the impact and diversity of insects in alternative silvicultural systems. The aim is to quantify insect populations and species richness across a range of sites, from traditional even-aged plantations to multi-aged highly structured stands, to identify relationships between stand complexity and: 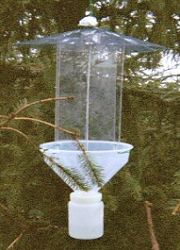 Twenty-four study plots have been established in Forestry Commission and private woodlands in mid and north Wales, and insect populations in each plot are being sampled from April to October using different types of trap and sampling technique (yellow pan traps, flight interception traps, litter collectors & beating of foliage). Sampling will be repeated over three successive seasons. The greatest numbers of insects in forest stands often occur high in the canopy (Su & Woods, 2001) and therefore particular effort is being made to sample insects throughout the vertical profile of the standing trees. A permanent scaffold tower erected in the centre of each study plot is used to sample foliage and position traps at different heights within the canopy. Further traps are located near ground level.

All of the study plots are located in stands of Sitka spruce so that the importance of stand structural complexity can be quantified without the complication of mixing tree species. The main insects of interest are foliage feeding species (e.g. green spruce aphid, tortricid moths & sawflies) and natural enemies of the foliar feeders. However, the abundance and diversity of ground beetles (Carabidae) is also being evaluated using pitfall traps, to link the new project to previous studies (Jukes et al., 2001; Jukes & Peace, 2003).

This research is funded by the Forestry Commission Alternative management approaches programme.

A PhD studentship (2006-2009) was carried out by Freia Bladon in collaboration with the School of Environmental Sciences at the University of Ulster, Coleraine, looking in more detail at variation in population abundance and impact of green spruce aphid (Elatobium abietinum) within the study system. 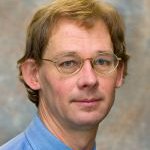