About the Petersfield i-Tree Eco Study

Trees improve local air quality, capture and store carbon, reduce flooding and cool urban environments. They provide a home for urban wildlife, a space for people to relax and exercise, and they can support community interaction. Despite these attributes, the nature, number, density and condition of the trees in Petersfield was, previously, poorly understood.

In 2016, it was decided timely to undertake a baseline resource survey of Petersfield’s trees. The i-Tree Eco model was selected as the most appropriate for this purpose.

The direct benefits to the people who live in and visit Petersfield are the focus of the report – they have not been systematically catalogued before. The beneficial attributes provided by Petersfield’s trees that were considered were carbon capture, rainwater interception, and the removal of air pollution.

The survey was undertaken by Petersfield Society volunteers.

This project aimed to:

For further details and results see the Full Report in the Documents section on this page (below). 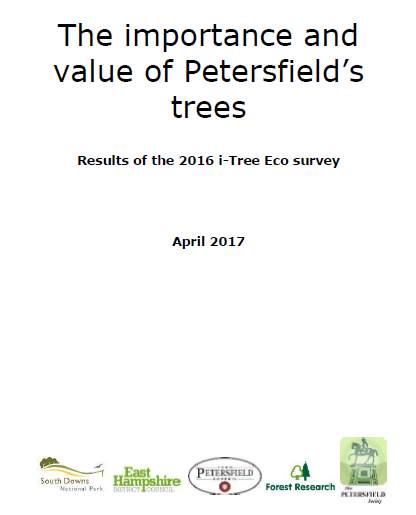 Bringing a fully functioning i-Tree Eco to the UK to support the quantification, valuation and resource management of urban trees, greenspaces and forests.