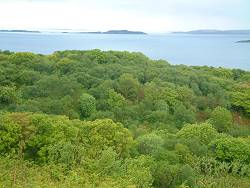 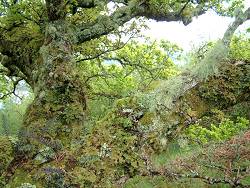 The study area was defined by the Forestry Commission Scotland (FCS), Highland and Islands Conservancy boundary, with a 15 km buffer (see map on right), comprising approximately 3,316,000 ha, of which almost 531,500 ha is woodland. Coniferous woodland dominates, with a sizeable proportion of this comprised of native pinewood, whilst heathland forms the dominant open ground habitat.

In the area covered by Highland and Islands Conservancy:

A Forest Habitat Network for the Atlantic oakwoods in Highland Region, Scotland (PDF-557K)

Maps (below) show the potential extent of functional networks can be incorporated into strategic plans for Highland to reduce habitat fragmentation:

A case study of the Sunart oakwoods indicates how the functional connectivity of these woodlands could be improved with some judicious planting: 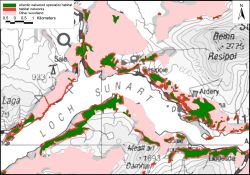 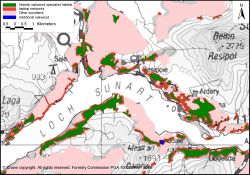 Practical implementation of the networks to improve biodiversity was quickly seized upon by the Forestry Commission Highland and Islands Conservancy. In January 2006, the launch of a locational premium scheme was announced with the aim "to achieve a targeted expansion of forest habitat networks in Highland to improve forest diversity and biodiversity and to increase the ability of forest species and habitats to adapt to climatic changes." An additional tool from the BEETLE suite was developed to determine how effectively new planting schemes could improve broadleaved and pinewood network connectivity.