Edinburgh and the Lothians Habitat Networks 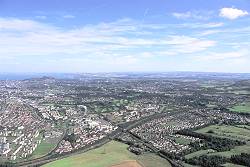 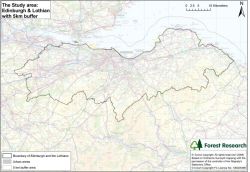 The region of Edinburgh and the Lothians covers an area of approximately 171,500 ha (see map on right) with a population of about 778,000, and is divided into 4 unitary authorities:

Each authority provides local plans that are linked by a regional structure plan.

The structure plan was recently reviewed to adapt to changes in the demographic situation of the region due to renewed economic growth. This in turn has resulted in a new housing requirement of 5,000 units per annum. Such an expansion creates intense pressure on land-use decisions, and requires careful planning to ensure that environmental and social needs are not compromised.

Although much of the non-developed land is agricultural, the region does have a significant area of woodland (about 13%), and large open-ground heathland areas.

This study attempts to assess the biodiversity contribution made by woodlands and heathland at the landscape scale, and to evaluate where effort should be targeted to consolidate high quality habitat, and link existing network components by woodland expansion.

In the Edinburgh and Lothians region of lowland Scotland:

The approach recognised that whilst the presence of one ancient woodland indicator species might occur by chance, or have been introduced, and would therefore not necessarily reflect biodiversity quality, the presence of additional species would strengthen the quality argument [Peterken, G. F. (2000). "Identifying ancient woodland using vascular plant indicators." British Wildlife, 11, 153-158].

The number of species used to provide a guide to biodiversity quality was defined as:

The Woodland Trust's 'Space for People' criteria were used to identify the accessibility of woodlands over 2ha and over 20ha to population centres.