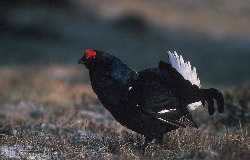 The black grouse (Tetrao tetrix) is a large gamebird closely related to the capercaillie. Although widespread in Britain until the latter half of the 19th century, it is now one of the most rapidly declining bird species in the UK with a distribution confined to some upland areas of Scotland, Wales and the North of England.

This has involved activities such as thinning trees in commercial plantations to create more open ground and patchy forest edges, as well as reducing herbivore impacts on moorland edges to encourage black grouse. Attention has also focussed on understanding whether techniques such as heather burning and cutting can benefit this species.

Monitoring the success of these conservation activities is difficult because black grouse are both rare and shy.

To date, population monitoring relies on counting males during the display period when they are at their most visible. However, this is time consuming and the number of actively displaying males can vary with time of day and weather. An alternative approach is to count the faecal droppings of black grouse, but this has proven somewhat problematic as it is sometimes difficult to distinguish the droppings of black grouse from other tetraonid bird species.

To resolve this difficulty we developed a real-time PCR based assay to distinguish between faecal droppings from black grouse and two other tetraonid species that can occur sympatrically; red grouse (Lagopus lagopus scoticus) and capercaillie (Tetrao urogallus). The real-time PCR approach is several orders of magnitude more sensitive than traditional PCR methods, with gel-based detection and is, therefore, appropriate for field collected faecal samples which tend to yield poor quality DNA in low copy number.

We have also designed our assay based upon variation in mitochondrial DNA, which maximises the potential for successful identification because of an larger copy number of mitochondrial DNA molecules per cell.