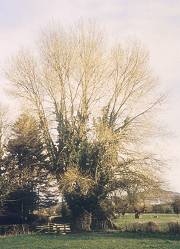 Black poplar is Britain’s rarest native tree and it is estimated that only about 7000 individual trees remain of this once common tree in Britain. It has become endangered because its natural habitat of flooded winter meadows has been largely lost due to drainage of agricultural land, canalisation of rivers and urbanisation. As a result of this the British population is unable to regenerate sexually and many of the existing trees are ancient and nearing the end of their natural lives. There has been little vegetative propagation of the species in Britain since the introduction of the faster growing P. x euramericana hybrids in the nineteenth century.

Prior to our studies it was known that the species had been extensively propagated by cuttings but it was not known how many individual genotypes were represented in the British population and what the level of clonal duplication was.

Our early work on this species was done using RAPDs – Random Amplified Polymorphic DNA – (Cottrell, Forrest & White, 1997) and the results were later confirmed using microsatellites in the framework of the EU funded project, EUROPOP (Storme et al. 2004). In a sample of 88 British trees only 20 individual clones were discovered, confirming suspicions that the British population is highly clonal.

Forest Research collaborated with other laboratories in the EUROPOP project to determine the routes taken by black poplar when it recolonised Europe following the end of the last ice age. These studies clearly showed that there were at least two refugia for black poplar, one based in Spain and one based in southeastern Europe (Cottrell et al., submitted).

The majority of the clones present in Britain originated from the eastern refugium. The few clones present from the Spanish refugium may have been via human mediated transport.

The P. x euramericana hybrids are represented by a very restricted number of clones in Europe but these clones are grown in large populations across Europe. In those areas where sexual reproduction still occurs there are anxieties that introgression from these hybrids may further reduce the diversity of the species.

However, work performed by Forest Research (Tabbener & Cottrell, 2003) and other laboratories within EUROPOP clearly demonstrate that the level of introgression is low when male black poplars occur within pollinating distance of female trees. In circumstances where there are no male black poplars the level of introgression from hybrid males in high.

These results have implications for the conservation strategies recommended for the species. A range of molecular markers are now available for the detection of introgression.

Conservation of black poplar: insights from a DNA fingerprinting approach