Role of forest management and scale in reducing flooding 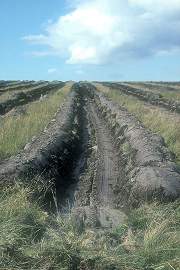 Both the amount of water used by a forest and the timing of water flows are greatly influenced by the nature of silvicultural practices. For example, water use varies with species choice and forest age, reaching a maximum for mid-aged conifer stands.

More important, however, is the propensity of forest practices such as site cultivation and drainage, road construction and timber harvesting to increase the speed of water runoff, opposing the effects of forest water use and soil storage. Forest clearfelling in particular can result in rapid surface runoff due to the removal of the vegetation cover and harvesting machinery having the potential to cause soil compaction and rutting.

Forest scale has a direct bearing on the impact of forestry on flood flows. Most serious flooding problems arise well down the catchment of major rivers. At this scale, forest cover often forms a relatively small proportion of the total land area. Thus any ability to reduce flood flows will be similarly limited.

Forest design also has a role to play in terms of the contrasting effects of the mix of forest species, tree ages and amount of open space, as well as the different forestry practices.