Assessment of drought risk in eastern central and southern England 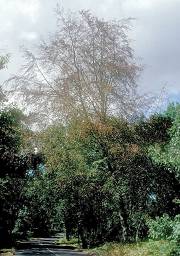 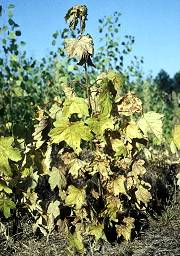 To assess the potential effect of dry summers on species suitability, information about the interactions between tree species, climate change, sites and soil properties is necessary at a detailed local level.

However the national digital soil data (Natmap) from the Soil Survey of England and Wales (SSEW) published by the National Soil Resources Institute (Cranfield University) is not sufficiently detailed to allow an assessment of climate change on forest soils at a site or stand-level.

Considering that some of the abiotic impacts on forests are likely to be caused by drier summers and wetter winters, a primary source of climatic information are maps showing the projected change in seasonal (summer and winter) rainfall in the future, mapped at a resolution of 25km in the UK climate projections (UKCP09: Murphy et al., 2009), and accessible on the UK Climate Impacts Programme (UKCIP) web pages. 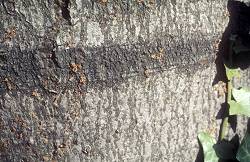 The orange tendrils (Conidia) of the fungus (Libertella faginea) on dead bark of beech (Fagus sylvatica) killed by the 1976 drought. This fungus is a common invader of drought damaged beech and could well have been involved in the death of the bark. Location: Windsor, Berkshire, England. Photographer: Robert Strouts.

We have developed a system to help forestry practitioners understand the interactions between climate, soil and site type and the impact the combination may have on tree species suitability.

A knowledge-base has been developed for forest soils, for use in the drier eastern, central and southern parts of England. We have been able to access a small sample of high resolution ‘paper’ soil maps, e.g. at a scale of 1:50k, to provide information on forest soils. The maps have been used in an analysis to identify the soil series (and Forestry Commission (FC) soil type equivalent) on which woodlands occur.

The areal extent of each forest soil has been estimated separately for a series of 25×25 km resolution squares, defined by UKCIP as a basis for the spatial projection of climate by UKCP09. For each numbered 25×25 km square (see map below), we have assembled a table of the 3 main forest soils, ranked 1-3 by area showing the series name and the equivalent FC soil type code.

Information in SSEW bulletins has provided a method for assessing the drought sensitivity of each soil series and, when combined with future changes in summer seasonal rainfall from UKCP09, an estimate of the risk of future drought in woodlands on that type of soil.

To follow – a table showing the most frequent forest soil types (Soil Series name and FC soil type equivalent) and their drought sensitivity is currently being finalised, and will be available soon. The table will provide an indication of the sensitivity of woodland to future droughts in that square.