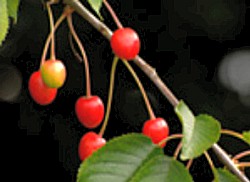 Wild cherry is a diploid member of the Rosaceae and is a frequent component of woodland margins throughout Europe. It reproduces both sexually (insect pollinated, bird and mammal seed dispersal) and asexually via suckering.

A DEFRA/Forestry Commission funded project explored the clonal structure of cherry in two semi-natural, ancient woodlands in Kent and found that 55% of the trees were derived from asexual reproduction.

The largest clonal patch consisted of 65 trees. Clonal groups were generally non-exclusive in their distribution and displayed a ‘guerrilla’ strategy where further single and multi-ramet genotypes commonly shared the territory occupied by the dominant clone. Evidence of somatic mutation within genets was also observed in both populations.

Recruitment, both asexual and sexual, was markedly higher in the years following major winter storms and attendant disturbance of the canopy. High spatial genetic structure (Sp 0.030-0.045) was observed in the sexually derived trees and kinship coefficients were significant up to 120 m.

Pollen flow was also examined using 13 polymorphic microsatellite loci and 54% of paternity was based on pollen from within the two woodlands. A young plantation adjacent to the semi-natural population contributed less than 7% to the paternity of the seeds. Progeny kinship (common paternity) was highest where a mother tree was surrounded by a large number of ramets of a single, compatible clone consisting of sizeable, adult trees. Due to differences in compatibility, close neighbours could be pollinated by very different components of the pollen cloud.